Step into the mysterios forest and join Red Wizard on his journey with the self-titled slot from Rarestone Gaming. Trigger the Fire Blaze Respins feature and win one of the four fixed Jackpots, trigger exciting Free Spins with random Multipliers, and win a top prize of 2,400x the stake. Play for free and claim a bonus

Demo game is not available at the current moment!

Online Casinos where you can play Red Wizard

We have scanned 11 casinos in US New Jersey and found Red Wizard at 1 of them. On the list below, you`ll find the best casinos that feature the Red Wizard slot and accept players from US New Jersey.

With the Red Wizard slot, game provider Rarestone Gaming expands its growing collection of 'Fire Blaze' slot machines. We've already seen 'Fire Blaze Jackpots' and 'Fire Blaze Golden' slots, but this one comes with the word 'Classics' in the title, though you'll hardly tell the difference. Developed in conjunction with Playtech, Red Wizard relies heavily on the same Hold and Win feature as its older siblings, yet a couple of other exciting extras will enliven the gameplay, if not deliver a massive payout.

The actions in the Red Wizard slot take place on a quite unorthodox 3x4x4x4x3 grid with 50 ways to play. The overall game's appearance is superb and true to the developer's style, the background imagery, as well as the symbols, are of top-notch quality. A dark forest covered in a sinister red mist makes u the backdrop here, along with creating a strong mysterious feel to the game. However, the magical ambiance gets spoiled when you press that spin button, as classic arcade slot machine sounds will blast off your speakers whenever you hit a win or trigger bonus features. Well, at least now we know what the word 'Classics' in the title really means. 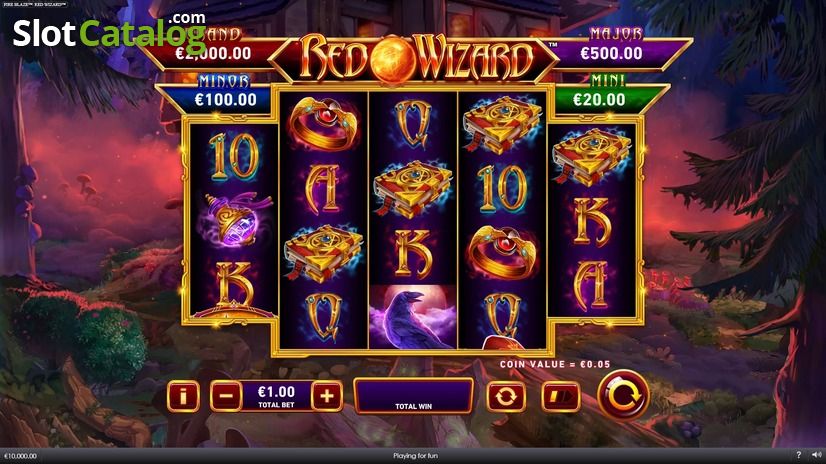 Heading over to the math model, it's necessary to say that Red Wizard is a fairly-balanced slot, with volatility that plenty can take on. Speaking of variance, it's in the medium range, while the RTP is decent above the industry's average at 96.49%. Thus, you should get your returns pretty often. However, the lower the variance the lower is the max win, so due to Red Wizard's nature, all you can hope for on a single spin here is 2,400x the stake. Anyway, the betting range here includes stake options from $0.2 to $500 per spin, which should certainly appeal to both casual punters and high-roller gamblers.

The symbol collection in the Red Wizard slot consists of 9 regular symbols, split into highs and lows. The lower side is made up of classic A-10 royals, then go four premium symbols. Those include in ascending order flasks with potions, rings, spellbooks, and crows. Five-of-a-kind low-paying symbol wins are worth 0.8x of the bet, while high-paying ones are from 1.25x to3x. Red Wizard himself is a Wild symbol, which acts as a substitute for any other regular symbol. They can be really helpful as they often land in stacks. 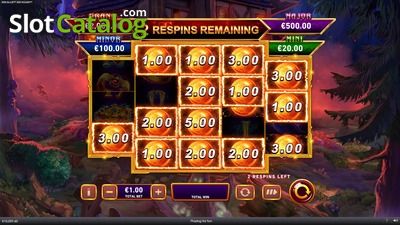 Red Wizard - Fire Blaze Respins
Cental to the gameplay is the Fire Blaze Respins feature, which gets triggered when 7 or more Flaming Ball symbols land simultaneously onto the reels during both the base and the bonus games. Triggering symbols will stick to the reels for the remainder of the feature, and players will proceed to the bonus game with 3 Respins. Now, only Flaming Balls and Stars can land onto the reel set, and all Flaming Balls come with a random cash value of 1x to 50x attached to them. Whenever a new symbol lands, it also becomes Sticky, as well as resets the number of Respins back to 3.

At the end of the bonus round, all Star symbols will transform to award either Mini, Minor, or Major Jackpot. The Grand one, meanwhile, is awarded when the player fills the entire grid with Flaming Ball symbols. Jackpot values are the following:

We're more on the familiar ground during the Free Spins feature. It's activated when 3 or more Scatter symbols appear in view, and once it does, players are awarded 6 spins to start. The free games feature operates almost in the same way as the base game, but the big difference is that reel 3 enhances Wilds and Flaming Balls whenever those drop on it. 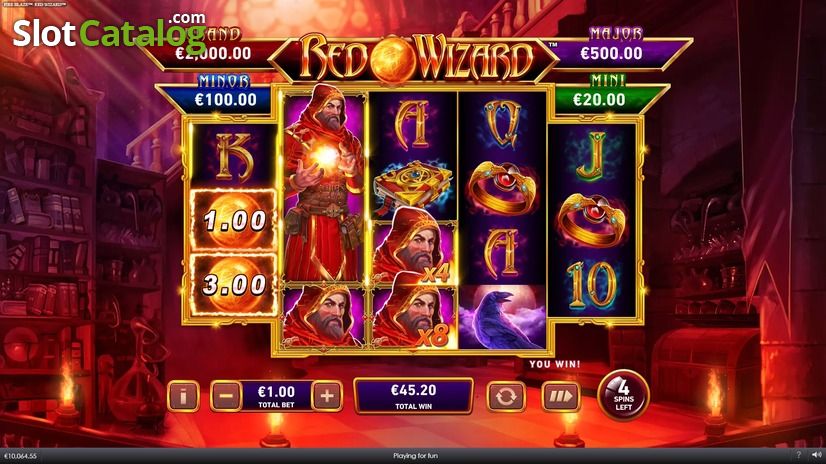 Now, all Wild symbols that appear on reel 3 during the Free Spins have a random Multiplier of 2x, 4x, 8x, or 16x attached to them, which gets applied to any win that Wild symbol takes part in. As for the Flaming Balls, they will have higher cash values if they land on reel 3, namely 5x, 10x, 15x, or 50x. Thus, you can access the Fire Blaze Respins feature within Free Spins, plus with a little boost on top. Free Spins can also be retriggered, with 3 or more Scatters adding 6 more spins to the total tally.

Rarestone Gaming keeps recycling the Hold and Win mechanic and has already come up with a bunch of exciting titles with these mechanics at the core. However, those rarely stick out with a variety of captivating bonus features or too generous math, but offer the same straightforward gameplay. Rarestone Gaming sticks to the same approach when developing Fire Blaze slots - along with the Hold and Win bonus, those come with unique Free Spins feature, which help them differ. However, Red Wizard has an ace up its sleeve. By far, it's the most appealing slot from the series, with an eye-catching design and special effects. Anyway, fans of the Fire Blaze series will surely appreciate Red Wizard, as well as it's a nice opportunity to get acquainted with it for those who hasn't yet.

Hold and Win
Load all

No comments so far, login to write the first one!

What are the key stats of Red Wizard?

What bonus features are included in Red Wizard?

Central to the gameplay is the Fire Blaze Respins feature, but the slot as well comes with stacked Wild symbols and Free Spins with random Multipliers.

Of course. It's compatible with all known devices, including PCs, tablets, and smartphones.

Where can I play Red Wizard for real money?

Check out the best casino list. for this slot we prepared for you, and don't forget to claim a welcome bonus to start your session on a good note.

Can I play Red Wizard for free?

Sure you can. You can play the free demo here at SlotCatalog.

List of casinos where you can find Red Wizard

Subscribe to receive our weekly newsletter including full coverage of new game releases, exclusive game releases and great bonus offers. It doesn’t matter whether you’re a Player, Online Casino Operator or Game Developer, we have something of value for you!